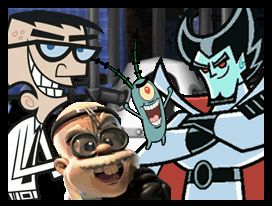 The Evil Syndicate is a villain organization who play an antagonist role in the Nicktoons Unite! series. The Syndicate is known for changing much since it was created. Some members started to work on their own, and others just left the group because they had other, and sometimes better, things to do.

The Evil Syndicate plays a main role in Nicktoons Unite!. Professor Calamitous is the leader of the group and created a device to travel through dimensions (although he took the idea from spying on Jimmy). With it, he brought Plankton, Vlad Plasmius, and Denzel Crocker to his dimension. They formed a Syndicate and proceed to steal energy from all the worlds. However every member was defeated one for one and the plan of the Evil Syndicate was stopped.

The Syndicate doesn't make an appearance in this game. However in the first level the giant crab robot Plankton used to fight the heroes was seen. SpongeBob even reminded Danny of their battle with Plankton. Danny said he found it weird that it landed up here.

Again the Syndicate from the first game doesn't return in this game. Only one member of the Syndicate, who also was the leader, appears, Professor Calamitous. He once again tries to take over the universes of the Nicktoons. Professor Calamitous states that by feeding Fairies Krabby Patties, they can emit a gas that, combined with Ghost energy, can be used as a form of fuel for his Army of Toybots. And with those Toybots he plans on reaching his goal.

In this game the Syndicate returns, however it had changed completely. The only member who appears that was from the original Syndicate is Plankton. The Syndicate first forms an alliance with the heroes, because Globulous has treatened all of their worlds. However near the end of the game the villains turn on the heroes, and Globulous who turned out to be good, and battled the heroes in the Vessel of Portentia. But of course they were defeated by the heroes and were left floating around in space.

It is confirmed that the Evil Syndicate will return, having yet a few other members. The Syndicate this time is bigger than in the previous games. In total, five of the previous members return. Their role in the game is to overthrow Pariah Dark, take control of his ultimate weapon, and rule the Ghost Zone themselves so they can use its energy to rule their dimensions. It was said that they were the ones who awakened him from the Sarcophagus of Forever Sleep, wanting to take control of him.

It should be noted that though the game features a wide assortment of villains, not all of them are strictly members of the Evil Syndicate. Amon and Tai Lung, for example, have their own plans and are acting on their own, whereas Ember McLain and Skulker have begrudgingly entered an alliance with Danny Phantom to stop the final boss of the game, Pariah Dark. And it is confirmed that there are a few former members, who side with the heroes to get revenge on the Syndicate or Pariah Dark. In some cases, most of the syndicate might also have a rivalry with some heroes.

The Evil Syndicate Appears in Super Smash Bros Brawl But renamed Subspace Army. The Nicktoons Villains are Replace With Nintendo Villains. The Leader is also replace with Tabu a Villain from Sonic's dimension.

Retrieved from "https://cartooncrossover.fandom.com/wiki/Syndicate_of_Evil?oldid=11968"
Community content is available under CC-BY-SA unless otherwise noted.