Super Brawl 2 is the fifth game released in the Super Brawl series, but it is mostly used by other games as updates. The game has all the previous games in Super Brawl. 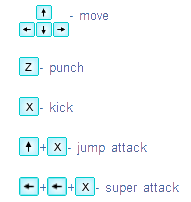 When the super bar is full and you perform your super attack it will be more destructive and powerful. A small sequence will be shown before performing it.

Retrieved from "https://cartooncrossover.fandom.com/wiki/Super_Brawl_2?oldid=12031"
Community content is available under CC-BY-SA unless otherwise noted.