Start a Wiki
SpongeBob SquarePants is the main protagonist and the eponymous character of the Nickelodeon animated comedy series of the same name. He was designed by marine biologist and animator Stephen Hillenburg, and is voiced by Tom Kenny. SpongeBob's a childish, joyful, eccentric sea sponge who lives in a pineapple in the underwater city of Bikini Bottom. He works as a fry cook at The Krusty Krab, a job which he is exceptionally skilled at. SpongeBob lacks a lot of knowledge and is a constant annoyance to those around him (especially Squidward Tentacles), but he is very good natured. He appears in all of the episodes in the series. He later was soon to be Nickelodeon's main mascot.

SpongeBob appears as a playable character in Nicktoons Unite!. On a normal day in Bikini Bottom, SpongeBob asked Gary what they should do today, and they decided to go visit Patrick. However Plankton was speaking through a speaker that he would rule the world and that anybody against him would be captured. He soon was capturing everybody. Goddard then appeared who shows Jimmy who asks SpongeBob to team up with him. After explaining the situation SpongeBob joins the team and with the four of them they stop the Syndicate of Evil from taking over the dimensions.

SpongeBob appears as a playable, and one of the main, characters in Nicktoons: Battle for Volcano Island. After Mawgu was trying to create a Rip in Time and Space the Chosen Ones were scattered throughout Volcano Island by him. SpongeBob and Danny happened to land in the same place. The Wise Old Krab tutored them and explained the situation. They went on a mission to find the other heroes and defeat Mawgu.

SpongeBob's special costume is him dressed as a pirate. He can unlock this costume by collecting a certain amount of clams in the levels. When collecting all of SpongeBob's Salvage Items you unlock a special level; Bikini Bottom Bash, which is set in a boatdriving theme. His house on Volcano Island resembles his pineapple house.

SpongeBob appeared as a playable character in Nicktoons: Attack of the Toybots. One normal day SpongeBob, along with Patrick, were doing a delivery from the Krusty Krab at a mysterious factory in Bikini Bottom. When delivering they just sucked all the Krabby Patties up accidently sucked Patrick in too. SpongeBob went to save him but found himself in another journey. They quickly met Tak afterwards and together they also freed other friends. They teamed up and eventually beat Professor Calamitous.

SpongeBob's special costume is SpongeGar from the episode "Ugh" which can be unlocked when collected enough gears. SpongeBob once again attacks with his Foam Gloves. SpongeBob also is one of the three characters to have a special mini-game, the others being Danny and Tak. SpongeBob then has to glide on his tongue in the sewers of the factory while evading all the obstacles.

SpongeBob appears as a playable character in Nicktoons: Globs of Doom. SpongeBob again got summoned by Jimmy to Volcano Island along with other heroes and villains. Because their worlds were at danger they decided to team up.

They went through several worlds to collect batteries and every time a boss was defeatedthey exploded and orange goo was thrown everywhere. And every time orange goo fell on SpongeBob which made him a communicator for the main antagonist. Eventually they had all the batteries and could use the Vessel of Portentia. They fought Globulous, who afterall turned out to be good. However the Syndicate turned their backs on the heroes and attacked them in the Vessel of Portentia. But the heroes managed to beat them and peace was restored once again.

SpongeBob has a special bubble blower which shoots bubbles out of it. When he hits an enemy they will be trapped in that bubble and can be killed with one hit.

SpongeBob appears as a playable character in Ultimate Nickelodeon Brawl Stars X. He is one of the three characters to represent his show. His Bubble Cannon from Globs of Doom returns as a weapon, while still retaining his foam gloves from the previous games.

From the ocean depths of Bikini Bottom, Spongebob is the most cheerful sponge you'd ever meet. A spirited fellow, he works as a fry cook down at the Krusty Krab, and is very skilled at his job. Not only that, he's pretty adept at blowing bubbles of all shapes and sizes as well, which comes in handy at times. Though his playful antics may annoy his friends (especially his neighbor, Squidward,) Spongebob is deep down a pretty noble guy. He has helped several of his Nicktoon friends in the past against various threats to his world, and destiny has summoned him to join the Nicktoon heroes once again. His answer to the call? "I'M REEEADY!!"

Bio: An ardent fan of the underwater hero Mermaid Man, Spongebob got to live the dream when he finally met his idol in the flesh! During one misadventure, Mermaid Man left him to watch his hideout, the Merma-Lair, and the evil Man Ray (who happened to be trapped in frozen tartar sauce.) Through a mishap, Man Ray managed to escape, and, left with no choice, Spongebob took it upon himself (with the help of his friend, Patrick) to bring the villain down and used his hero's ring to transform into Mermaid Man (or at least his version of him!)

Bio: You once tried me on for size because you wanted to show you had guts. That you could stand up for yourself and say, "No."

Now, you could say it all you want. Won't do you any good. But thanks for the body. I'll take good care of it. Nyahahahahahaha HAHAHAHAHAHAHA!!!

SpongeBob appears as a playable character in Nicktoons MLB. He is left-handed and leaves a rainbow behind when he throws or slams the ball.

SpongeBob appears as a playable character in every Super Brawl game. From Jingle Brawl to Super Fall Brawl moveset was based of Ryu from Street Fighter. His special attack was a purple hadoken, which later was turned into a blue colored version. In Super Brawl 2 he appeared in his normal appearance and the SpongeBob of the previous games was labelled as "Classic SpongeBob."

SpongeBob's special attack involves him jumping into the air and then kicks forward, similar to Liu Kang's Bicycle Kick from Mortal Kombat. His charged special is him absorbing much water then jump into the air and pound very hard on the ground.

In Super Brawl 3 his special attack is called Jellyfish Blast, which SpongeBob puts on his Jellyfish glasses and shoots an electrified jellyfish at his opponent. Dylan and Bobbi are SpongeBob's fans, who slash with their fishing nets and create a many bubbles. He reappears in Super Brawl 3: Just Got Real, this time designed to look like a real-life sponge on a stick. He gains a new special attack, Burger Blast, where he swings a large spatula, causing many Krabby Patties to appear.

SpongeBob reappears in Super Brawl 4 as the Invincibubble.

Classic SpongeBob is basically a parody from Ryu from Street Fighter. His special forming an energy ball in his hands and then throw it forwards as a Hadoken. His charged special attack is a large beam of energy that is shot forwards. This attack resembles a Kamehameha preformed by many in the Dragon Ball Z series.

Abrasive SpongeBob is a new, original, character introduced in Super Brawl 3. He is exactly the same as SpongeBob, except for the fact that the front of his face is green, similar to a kitchen sponge with an abrasive layer. His special attack is Scratch Slide in which he scratches over the floor, sliding on his belly, and created static shocks around him. His fans are Spike and Thistle who help him by sending multiple jellyfishes on the stage. He is based after SpongeBob wearing his abrasive side in the episode The Abrasive Side. He reappears in Super Brawl 3: Just Got Real as the only "evil" character. Like SpongeBob, he is designed to be more like a real sponge on a stick. He has a new special attack, Grumble Rumble, where he says a curse word and the resulting censored word crashes onto the ground.

Invincibubble is a new character that made his debut in Super Brawl 4. He is based on SpongeBob's superhero identity in The SpongeBob Movie: Sponge Out of Water. He can shoot bubbles from the bubble wand mask on his head. His special move involves him pointing his finger at the enemy, burning him or her.

In Nickelodeon vs. Disney: Ultimate All-Stars, SpongeBob appears as one if the playable characters on the Nickelodeon universe.

SpongeBob appears as a playable character in this game.

SpongeBob appeared in all the Nicktoons Racing games. The first game was actually to promote for his show, and he has appeared since. In Nicktoons Winners Cup Racing he drives a normal boatmobile and in Nicktoons Nitro he drives a Hot-Rod Boatmobile.

SpongeBob in his show 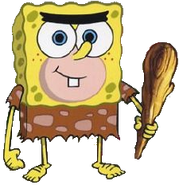 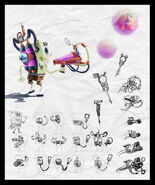 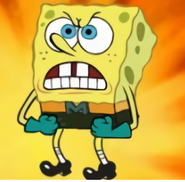 Add a photo to this gallery

Retrieved from "https://cartooncrossover.fandom.com/wiki/SpongeBob_SquarePants_(character)?oldid=12002"
Community content is available under CC-BY-SA unless otherwise noted.