Nicolai Technus is a villain in the cartoon Danny Phantom. He is voiced by Rob Paulsen, in a voice strongly resembling that of Gilbert Gottfried. Nicolai is the ghost of a former egotistical technological genius (however it should be noted that none of either his inventions/research that he might have created during his former life has ever been mentioned in the show). In the show he is introduced when Danny was tasked with cleaning the Fenton Lab, popping out of the Fenton Portal. Later Danny sells some of his dad's stuff, which was covered with ectoplasm. The gadgets collected and turned into a robotic armor that Technus uses. This is probably how he got into the human world. He is primary Ecto-Mechanical in nature (such as Samara in the Ring film series (which featured Brian Cox (the voice of Pariah Dark) in the first entry as Samara's father Richard Morgan)), mainly linking himself to either a mechanized power armor or any other form of basic technology (such as turning himself into a Ecto-based computer virus, etc..). Technus also is similar to other comic book villains such as Brainiac and Ultron in the sense that in nearly every new appearance on the show he is nearly always in some new upgraded Armor/Form.

Technus appears as a playable character in Nicktoons: Globs of Doom. Technus got summoned by Jimmy to Volcano Island along with other heroes and villains. They went through several worlds to collect batteries. Eventually they defeated Globulous who them turned out to be good. However Technus, along with the other villains, turned on the heroes and took control over the Vessel of Portentia and fought the heroes. However they were defeated and left stuck in space.

Technus special weapon is a magnet with sharp points, which he attaches to his lower arm. When he uses his weapon, he will stab the opponent and electrify them. The enemies will be stunned for some time allowing Technus to attack them.

Technus appears as one of the two unlockable characters in Ultimate Nickelodeon Brawl Stars X. He is also one of the many Danny Phantom characters in the game. He appears in his form from his first appearance so there would be more larger characters. You can buy him from the store with 5000 Tenzin Tokens or Win 25 Online Matches.

Technus is the self-proclaimed 'Master of Science and Technology', and he wants everyone within a five-mile radius to know it. He is actually a spectre whose specialty involves invading electronic devices and possessing them to do his bidding. He is also adept at cybernetic warfare, and, almost like a virus, disrupts networks, software and hardware with his presence. He is one of Danny Phantom's strongest opponents, and is constantly upgrading his form to be better able to combat his sworn enemy and eventually take over the world!

Bio: Though he had constructed a powerful battlesuit based on his initial design, Technus hadn't forgotten about his experiences with Mawgu technology, and enhanced it with the upgrades he had received in a previous adventure. The shades? They're an upgrade to his 'swag.exe' programming. 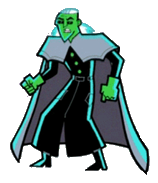 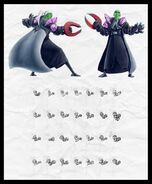 Globs of Doom artwork
Add a photo to this gallery
Retrieved from "https://cartooncrossover.fandom.com/wiki/Nicolai_Technus?oldid=11827"
Community content is available under CC-BY-SA unless otherwise noted.