Start a Wiki
Nicktoons: Attack of the Toybots (known as SpongeBob and Friends: Attack of the Toybots in Europe) is the 2007 sequel to the 2005 Nicktoons Unite! and 2006 Nicktoons: Battle for Volcano Island and is the prequel to "Nicktoons: Globs of Doom". Characters from SpongeBob SquarePants, Danny Phantom, The Fairly OddParents, The Adventures of Jimmy Neutron: Boy Genius. It is the first time Tak and the Power of Juju appears in the video game series. It was then followed by Nicktoons: Globs of Doom in 2008.

The opening intro for the game features Calamitous on some sort of game show (which is called the Biggest Genius). Professor Calamitous states that by feeding fairies the Krabby Patties, they can emit a gas that, combined with Ghost Energy, can be used as a form of fuel for his army of the Toybots.

After finding his way through the factory, SpongeBob finds Patrick vacuum-packed like a toy. After freeing Patrick, he meets Tak, who claims to have been abducted and scanned. They later find Timmy, Cosmo, and Wanda. Since Cosmo and Wanda ate too many Krabby Patties, they aren't able to wish the factory away, but can still protect the heroes from harms way.

They later find Jimmy who also claim to have been abducted and scanned. They meet the Chadbot, a robot who is Calamitous' helper. They ask him to use something to contact Danny Phantom and commands them to find more master models for his collection.

After collecting the master models, Jimmy contact Danny who says that Calamitous, invading toy army took over his house to use he energy coming from the Ghost Zone so Jimmy tells Danny and Sam to meet him and the other Nicktoons at the Amity Park (which is almost destroyed) EvilToyCo outlet and when they get there they see Jimmy made some mech-suits that will let them fight the big tin robots. After defeating a giant evil toy Jimmy head, they head back into the factory where they find some more master models.

Chad-Bot tells them that Saucer Men toys capture heroes, so the Nicktoons go through the factory, collecting the rest of the master of master models, and destroy the Saucer Men toys, then the Nicktoons head to Fairy World. They then free Jorgen (who was in a frozen state on till Patrick bumped into him thanks to Jimmy), who destroys the fairy harvester, and then get back into the mech-suits to the Professor's lair (Jorgen even tells them to collect 500 fairies which they do).

They get to where the opening into of the game was and the winner of the Biggest Genius is none other than Chad-Bot himself who tells Calamitous, plan to abduct the best characters from every universe lead to his victory and the game ends with Chad-Bot cutting Calamitous, mustache off with a electric shaver.

Before each level you can select two characters as who you want to play as in the level. However in the special levels in which you control a mech-suit you can only select from the default characters. In the handheld version everyone can enter a mech-suit during the level when reached it.

There are three bonus levels in the game. In the first one you play as SpongeBob. You have to slide down on your tongue through the sewer without hitting any obstacle. You can however bash into enemies to destroy them. The second minigame features Tak who has to reach his way to the exit while climbing up walls, evading spikes etc. The third minigame has Danny who turns invisible and has to activate generators within the time limit to go to the next room. He has to blast away blocks with his ghost powers for this. 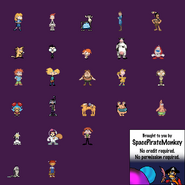 Retrieved from "https://cartooncrossover.fandom.com/wiki/Nicktoons:_Attack_of_the_Toybots?oldid=11965"
Community content is available under CC-BY-SA unless otherwise noted.